In the Germanic literature of the early Middle Ages there is a very mysterious word that is invariably mentioned in the same breath as fire and destruction and the end of the world, to wit Múdspelli. Its literal meaning is unclear and the question is also whether it is a Christian concept originally or whether it stems from Old Germanic heathenry. Many proposals have been made, but none of them are very convincing. Might we then think of a new interpretation?

Saxons
At the beginning of the ninth century the christianisation of the Saxons –living in what is now Northwest Germany and the Northeast Netherlands– is in full swing. As part of this effort an exceptional work appears between 825 and 850: an Old Saxon epic poem of nearly six thousand lines, wholly in Germanic alliterative verse, which tells the tale of Jesus as if he were a lord who leads warriors and travels through the immeasurable forests of Middilgard. It is nothing less than the Germanic edition of the gospel. The poet is unknown and he did not give his work a title, but he calls Jesus the Hêliand (‘Saviour, Redeemer’) among other things and under that name it is presently known.

Though here they wax forth,
The damned of men, along with the good,
Until Múdspelli’s might comes over men
At the end of the world.

Be verily wakeful! To you has surely come
The beaming doomsday and the strength of your lord,
The great power and the shining time,
The end of this world. This you shall heed,
That he does not find you suddenly,
Sleeping in your bed, at evil deeds,
Full of crime. Múdspelli comes
In the dark night, fares as a thief,
Stealthy in deeds. So comes to men
The last day of this light, before these people know it,
As the flood did in ancient days,
When it devoured people with sea-streams,
In Noah’s time.

Although the Hêliand is not a direct Bible translation, some parts are certainly very familiar: “For yourselves know perfectly that the day of the Lord so cometh as a thief in the night” (1 Thessalonians 5:2). But who or what Múdspelli is precisely remains unclear, although it must have been a familiar word to the Saxon audience, which suggests it is old. The Hêliand is, by the way, the foremost of but few truly literary works in Old Saxon, so it should be no surprise that the word does not show up elsewhere in Old Saxon writings.

Bavaria
Around 870 AD, further to the south –in Bavaria– an Old High German poem appears which relates the battle between Elijah and the Antichrist, as if they were the champions of God and the great Enemy. Elijah defeats the Antichrist, but he himself is hurt as well and as soon as his blood touches the Earth it ignites in a terrible way. Lines 55b–60b (own translation):

Doomsday is then in the land,
Shall come to visit men with fire,
There no-one may help his kin before the Múspilli.
Then the wide earth will wholly burn,
And fire and air will sweep it all away.
Where is then that land that men ever quarrel over with their kin?

The poem goes on to tell that the whole of Mittilgart shall burn: no mountain or tree is spared. Water dries up, seas are devoured, the heavens are aflame and the moon falls. Nothing withstands the Múspilli. One may notice that the shape of the word is somewhat different: compared to Old Saxon Múdspelli it seems Old High German Múspilli is slightly corrupted. Its precise meaning remains unclear, but here too it must have been a familiar word to the audience at the time.

Iceland
The last places where the word appears –this time in the form Múspell– are in Old Icelandic literature. One of the most important written sources concerning the Germanic heathen world view is a volume of verse that is known today as the Poetic Edda. Foremost is the Vǫluspá (‘prophecy of the seeress’). This poem, which was most likely composed in the 10th century by a heathen who thereby passed on ancient tradition, tells of creation and of the end of the world – elsewhere referred to as Ragnarǫk. We may read near its end, in verses 51 and 52 (Larrington’s translation):

A ship journeys from the east, Múspell’s people are coming
Over the waves, and Loki steers.
There are the monstrous brood with all the raveners,
The brother of Byleist is in company with them.

Surtr comes from the south with the harm of branches [i.e. fire],
The sun of the slaughter-gods glances from his sword;
The rocky cliffs crack open and the troll-women are abroad,
Men tread the road to hell and the sky splits apart.

Elsewhere in Old Icelandic literature more is told about Múspell, namely in the so-called Prose-Edda, a kind of poet’s handbook full of stories which was written around 1220 AD by the Christian historian Snorri Sturluson. For this he drew from heathen tradition, like the aforementioned poems, but often it cannot be discerned to what extent he added his own material, so that one should read with caution. In chapter 4 of the part called Gylfaginning, Snorri relates the following (Faulkes’ translation):

Then spoke Third: ‘But first there was the world in the southern region called Múspell. It is bright and hot. That area is flaming and burning and it is impassable for those that are foreigners there and are not native to it. There is one called Surtr that is stationed there at the frontier to defend the land. He has a flaming sword and at the end of the world he will go and wage war and defeat all the gods and burn the whole world with fire.’

Further on in the story it is told that in the earliest days Múspellsheimr (‘Múspell’s home’) shot out molten particles and sparks and that the gods and the dwarves fashioned from these the sun and the stars. And several times it is mentioned how Múspellsmegir (‘Múspell’s lads’) and Múspellssynir (‘Múspell’s sons’) shall ride out in the end and wage war, bringing about the destruction of Miðgarðr.

Interpretation
That the word is a compound is certain, but what does it really mean and how old is it? Is it a Christian concept that managed to reach even Iceland when that was still mostly heathen –which in itself is not unthinkable– or is it old enough to stem from heathen times? As said above, it is likely to be fairly older than its first attestation, as the word must have already been quite familiar to the audience at the time, and thus seems to be of heathen origin.

Much has been proposed at any rate and the discussion is still on-going. A good summary of this can be found in Hans Jeske’s 2006 article mentioned at the bottom. In short: the first part of the word has been connected with Old Saxon múð ‘mouth’ and cognates and with Latin mundus ‘world’, the second with Old High German spell ‘story’ and spildan ‘to destroy’ and cognates, so that we may end up with interpretations like ‘verbal destruction’ (by God), ‘oral story’ (as a clumsy translation of Latin ōrāculum ‘divine uttering’) or ‘world destruction’. But all of these are problematic in matters of form, content and history, so that none may really convince. It is therefore high time for a wholly new interpretation.

First of all: Old Germanic inherited from its predecessor –Proto-Indo-European– multiple manners of making compounds. In one of these, two words and a suffix where joined together to form a single neuter noun. The suffix gave the compound a sense of multitude and collection. A well known example of this is the joining of *alja- ‘other, foreign’ + *landa- ‘land’ + -ją (suffix) into *aljalandiją (n.), ‘the whole of other lands’, that is ‘foreign parts, abroad’. The word has been attested as Old Saxon elilendi, Old High German elilenti and Dutch ellende, among others. This manner of compounding seems to have fallen out of use soon after the Old Germanic period, so that when we find such a compound in the daughter languages it is likely to be rather old, i.e. from before the christianisation of the Germanic world.

Well then, Old Saxon Múdspelli, Old High German Múspilli and Old Norse Múspell very much seem to be exactly that kind of old compound. Among other things they are neuter and show a trace of the aforementioned suffix. That is to say, they appear to continue Old Germanic *Mūdaspalliją (n.), a compound of *mūda- + *spalla- + *-ją (suffix). The question is then: what are *mūda- and *spalla-?

We can be brief about *spalla-. Although the word is otherwise not attested in the Germanic languages it can be well connected with the Proto-Indo-European root *(s)pel-, *(s)pol-, which is known from Old Church Slavonic poljǫ, polĕti ‘to burn, to flame’ and Russian pólomja ‘flame’, among others. In that case Old Germanic *spalla- would have meant something like ‘fire’ or ‘flame’.

There is more to say about *mūda-. This word is attested in the Germanic languages, albeit with different suffixes. On the one hand –with a suffix denoting familiarity and small size– there are Middle Low German mudeke, 16th century Dutch muydick, regional German Muttich, Mutch, Mautch and East Flemish muik, all of which roughly mean ‘store or hoard of fruit or money’, yet sometimes more generally and originally ‘pile, accumulation’. On the other hand there are Old High German múttun (pl.) ‘storehouses’, Silesian Maute ‘depository of fruit’ and Bavarian Mauten ‘store of fruit’.

From this we may gather that Old Germanic *mūda- likely meant as much as ‘accumulation, multitude, abundance, etc.’ or otherwise in an adjectival sense ‘abundant’.

Conclusion
*Mūdaspalliją would hence be a very old, heathen concept, best understood as the ‘Abundant Flames’ or the ‘Fire of Abundance’, and by extension the ‘Fiery End of the World’. And that is a sense which excellently fits the contexts in which we find the word in the daughter languages. One may read them again above. A possible objection is yet that the word would then have been formed from rather obscure material. But that is exactly something we would expect from an old, mythologically loaded word. Germanic poets often used words which were not or rarely used (anymore) in common speech in order to create a style of high seriousness.

Based on the Old Icelandic names Múspellsmegir (‘Múspell’s lads’) and Múspellssynir (‘Múspell’s sons’) it has been argued that Múspell is a giant or some such. But the word is neuter, as mentioned, and according to the interpretation presented here its ‘lads’ and ‘sons’ are well understood as a poetic notion of the separate flames that rage forth as the whole of the world is devoured.

The Vǫluspá relates that after this end-battle the Earth will rise again –green and fresh– and that men will lead a care-free life in mirth. The similarities with Christian teachings about the afterlife on a New Earth are striking and often regarded as evidence of borrowing. However, when we realise that in the Old Germanic age many a longhouse and meadhall must have gone up in flames, that woods could burn from unlucky strikes of lightning, and many acres might have been scorched by foes, and there was nothing for it but to rebuild and resow, then it is quite possible that the heathens of old reckoned that the whole of Middilgard might once end up in Múdspelli, that the world of men would burn in an All-blazing Fire, before it would rise again – green and fresh.

Image
Made by John Ketchum. Some rights reserved.
References

Vaan, M. de, Etymological Dictionary of Latin and the other Italic Languages (Leiden, 2008) 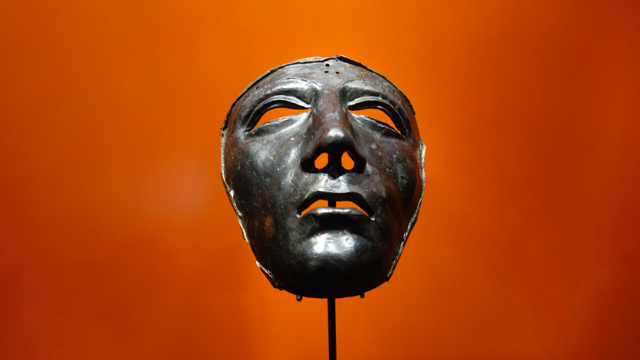 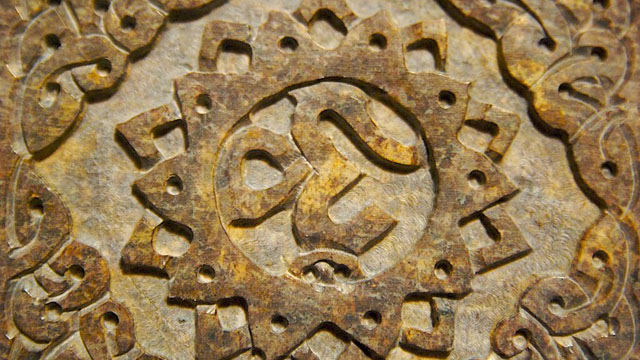